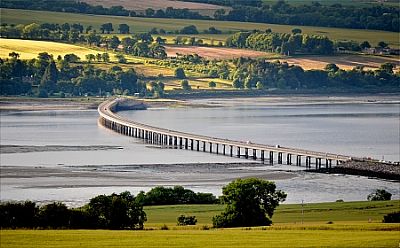 Major refurbishment works planned for the A9 Cromarty Bridge are set to get underway in August which will see four spans of the bridge upgraded.

Works will involve concrete repairs to the bridge deck and supports as well as the installation of protection measures to prevent future deterioration.  The bridge deck will then be waterproofed and resurfaced to ensure a smooth and safe journey for bridge users.

The project, announced in December last year, will be undertaken over six months starting from Monday 14 August, and follows on from a previous phase of refurbishment work to the first four spans of the bridge carried out in 2011.

The £1.5M project is the latest investment into the 1,462m long structure, bringing the total invested into the bridge by Transport Scotland to £5.8M since January 2016.  In the past 18 months this package of improvements included the replacement of the bridge parapets on both sides of the structure, the installation of scour protection measures around six of the bridge piers, as well as advanced electrical works to help facilitate the deck span refurbishment works commencing in August.  Resurfacing was also completed in June across almost the whole length of the bridge, with the remaining sections to be resurfaced following completion of the bridge refurbishment project.

Temporary traffic lights will be continuously in place until the works are complete.  This will allow for our teams to safely access the bridge to complete the repairs, and also ensure the safety of road users.

The temporary traffic lights will be monitored on site, and manually controlled at peak periods to optimise traffic flow through the work site.  Timings of cruise ships to Cromarty Fifth have also been noted to allow for traffic to be accommodated.

BEAR Scotland has met with key stakeholders including The Highland Council, the emergency services, Cromarty Firth Port Authority and the Road Haulage Association to inform them of the planned upgrades to Cromarty Bridge, and feedback has been taken on board in the design of the works.

Eddie Ross, BEAR Scotland’s North West Representative said: “We’re pleased to begin the £1.5M refurbishment for Cromarty Bridge, which will ensure it continues to withstand the harsh natural environment and make sure it will remain in a safe working condition for years to come.

“We’ve met with representatives from The Highland Council, Cromarty Port Authority, the emergency services, Road Haulage Association and other stakeholders, and have taken account of the issues raised in the design and programming of the project.

“We’ve also taken on board the lessons learned from the previous refurbishment works in 2011 to make sure we can carry out this phase of bridge maintenance as quickly and effectively as possible.

“Our design teams have taken account of big events such as the Black Isle Show and Belladrum Festival when planning these works, and have arranged to start the project after these festivals have taken place to further limit any impact.

“We’ll be manually operating the temporary traffic signals at peak times to ensure traffic flows are optimised to minimise delays to road users, and, according to our traffic impact assessments, delays of up to ten minutes can be expected.  We’ll be working to keep delays as low as possible and using VMS signs to inform motorists of traffic conditions.  Traffic Scotland will be kept up to date to share information about delays.

“We thank road users in advance while we complete these works, and encourage them to plan ahead using the Traffic Scotland website for up to date journey information.”